To my Mummy as a keepsake 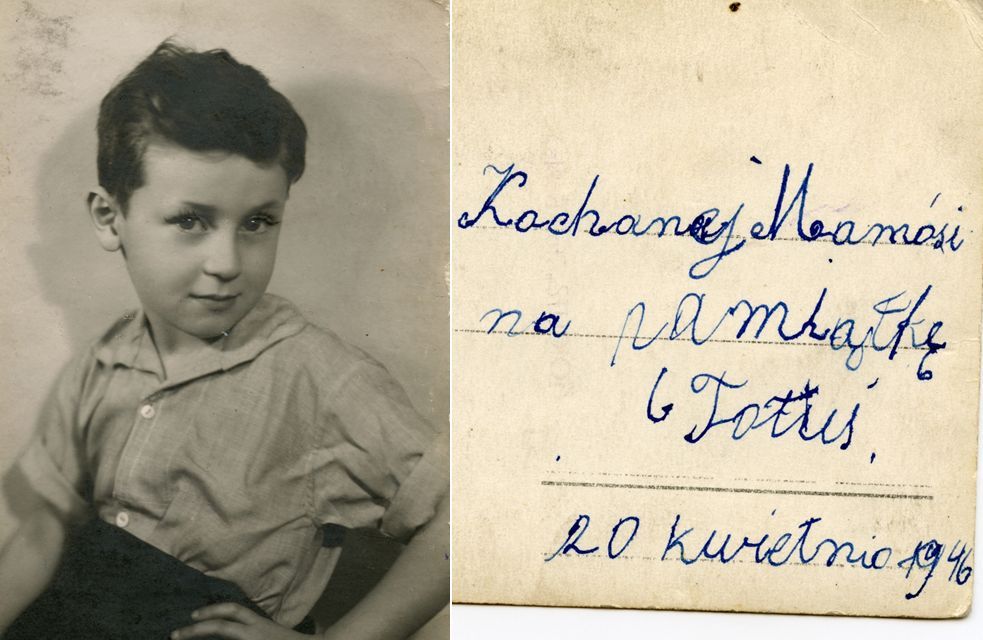 A million Jewish children lived in Poland before the war. The vast majority of them were killed by the Germans. Only several thousand survived, mainly thanks to individual efforts of adults, but also through organised projects. The stories of a few of them are presented in the virtual exhibition on children who survived the Holocaust that the POLIN Museum has launched on the Polish Righteous website.

The exhibition is entitled “To my Mummy as a keepsake”. Tolek Wajnsztajn wrote this inscription on the back of his photo for Wanda Bulik, who took care of him in 1941 and helped him survive the Holocaust. He gave Wanda the photo with the inscription after the war as he was leaving for Israel with a Jewish foster family.

Those presented in the virtual exhibition include Lea Balint, who was hidden in a convent, as well as Liliana Alter, Mati Greeberg, Elżbieta Ficowska, Lili Fuchsberg and Sabina Kagan, who were all saved by Polish families. The exhibition shows the individual life stories of those people as well as elements that were common for all Jewish child survivors: dramatic separation from their parents, a new home, a new identity and life after the war.

To be saved, Jewish children had to be secretly smuggled out of ghettos and then placed with Polish families or care facilities on the so-called Aryan side. This involved tremendous risk as the Germans punished such action with death. As regards care facilities, Jewish children were most often accepted by institutions run by nuns. Although the Catholic Church did not organise any general actions to save Jews, some nuns decided to offer help and were involved in an underground network.

After leaving the ghetto, the children’s origins were carefully concealed, both from the German occupiers and the Polish community. The hidden children had to adopt new roles and play them consistently. They received new names and documents, and they were taught how to behave and pray, what to say and what not to say. Following the rules of religious life was particularly important in facilities run by nuns. Some children were also baptised. Children often built these new identities with a sense of fear and incomprehension about their situation. In the case of very young children, these changes often took place unconsciously.

After the war, most children were taken to Israel by Jewish organisations or foster families. While abroad they started new lives once again. Some of them did not leave and continued to be separated from their Jewish identity. Some children learnt about their background by accident, after many years. All of them, regardless of their situation, struggled with the problems caused by the change of identity and religion and lack of family roots. They were also haunted by traumatic wartime memories. A number of these people are still looking for their roots and are discovering fragmentary information about their families.