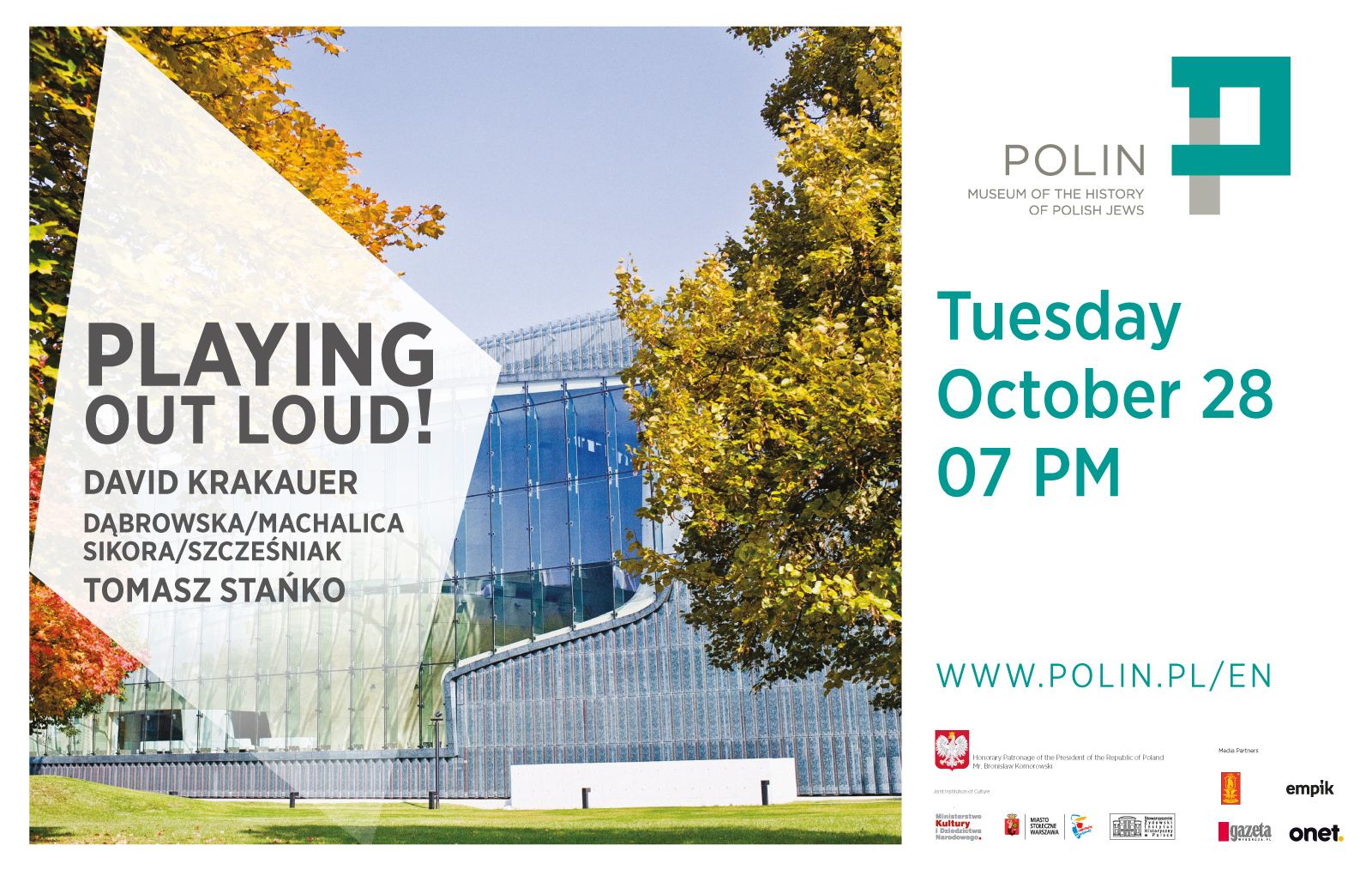 We have been waiting for this day for over 20 years! The opening of the Core Exhibition of the Museum of the History of Polish Jews is fast approaching. On that occasion, on October 28th, we invite you to a musical performance entitled “Gramy Otwarcie” (We Are Playing the Opening)!

The concert will be divided into three parts:

David Krakauer’s concert with the Ancestral Groove Group is organised by the Museum in cooperation with the Jewish Culture Festival in Krakow. Here is what the director of the event in Krakow-Kazimierz is saying about the music of the group’s leader:

“He plays with a passion of a heretic who establishes new borderlines of cognition. And he permanently crosses these borderlines. At the same time, he plays in a mystical concentration, being aware of his art’s origins, and being totally devoted to his art. He is the Messenger. And as he has done for 25 years at the Krakow Festival, also today, at the Opening of the POLIN Museum of the History of Polish Jews, David Krakauer will speak on behalf of us all for whom life is the most precious of all - a reborn Jewish life – in Poland, in Europe, in America, in all corners of the world. And in Israel - the centre of Jewish life”.

The participants of the performance entitled “We, Polish Jews” will include: Natalia Sikora, Katarzyna Dąbrowska, Piotr Machalica and Mietek Szcześniak.

“Trying to define particular sequences of the triptych of the opening spectacle, it can be said that a driving force of the first part is energy, vitality and tradition; of the second part is remembrance and history; and of the third part – hope and contemporary reality”, says Andrzej Strzelecki, the director of the event. “In separation, these parts of the triptych would be incomplete, would not properly reflect the idea of the Museum which – while taking care of the appropriate place of yesterday - is simultaneously building a modern tomorrow in a beautiful and rational way”, adds Strzelecki.

The final part of the performance is a premiere of Tomasz Stańko’s suite Polin. Apart from the excellent trumpeter, also American stars of global repute will appear on the stage: the saxophonist Ravie Coltrane, the pianist David Virelles, the bassist Dezron Douglas and the drummer Kush Abadey.

“I accepted the assignment from the Museum with great personal joy”, says Tomasz Stańko. “Musician’s primary tool of expression is sound. I wish to play the most beautiful, profound music worth the Grand Opening of the Museum of the History of Polish Jews. I believe that it is a duty of every positively thinking person, both a Pole and a Jew, to search for various forms of closeness. Our histories have been intertwining for a thousand years. It is our common land. Our obligation is to make our relations beautiful and inspiring creative values and ideas. I am a Pole, of course, I live here and I speak Polish but to tell you the truth, I identify myself, first of all, as Tomasz Stańko. It seems to me that in future, people will feel like – to quote Witkacy – single monads, and will have various, intertwined roots which will bring magnificent results”, adds the musician.

October 28th, at 7.00 p.m. We Are Playing OPENING! – the performance to mark the Opening of the Core Exhibition of the POLIN Museum of the History of Polish Jews. Admittance free.