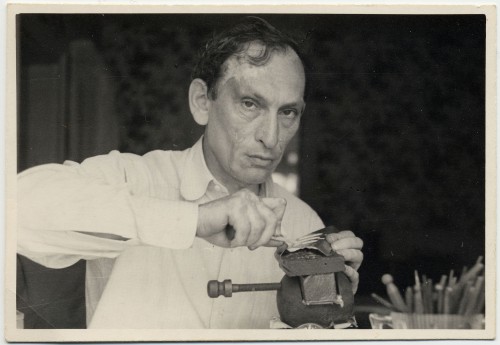 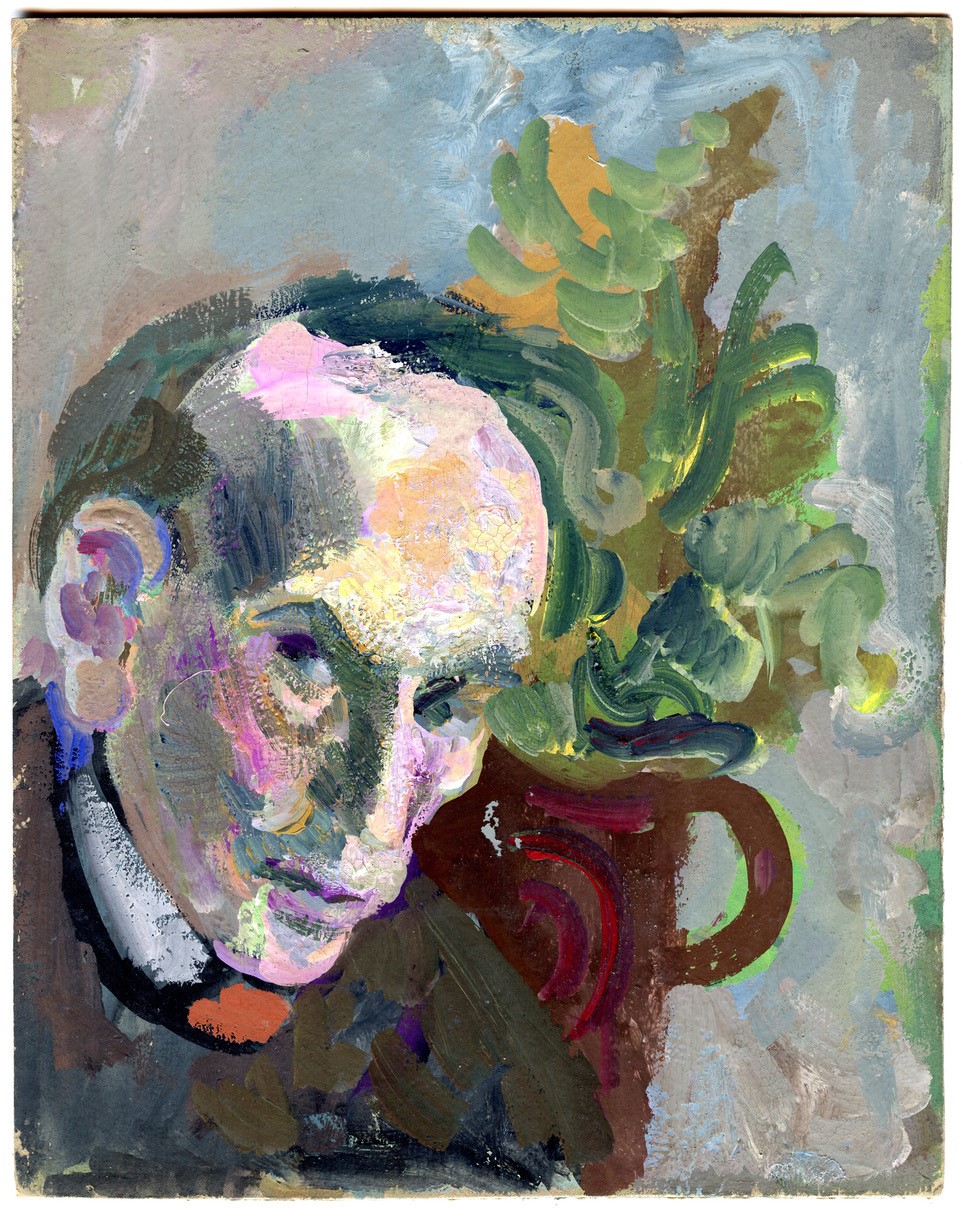 Mira Schor, in conversation with Barbara Kirshenblatt-Gimblett, will explore the life and work of her father, Ilya Schor, a renowned painter, jeweler, book illustrator and artist of Judaica, and forerunner of the "Jewish style" in American art.

They will also reflect on the life and work of Mira’s mother, Resia Schor, who was a talented artist in her own right, as is Mira herself. What is the legacy of their work, what does it mean to Mira, and why is it important for future generations?

Join the next "Meet the Family" conversation. Ilya Schor, born in 1904 in Złoczów, studied at the Academy of Fine Arts in Warsaw, escaped the Holocaust with his wife, Resia, and arrived in the United States in 1941. Although he spent the last twenty years of his life in New York, he never left Złoczów, the place of his youth, a constant theme in his work, which evokes the lost world of Jewish life in the small towns of Galicia.

As his daughter has written, "Every stroke of paint carries art historical DNA, and in my father’s paint stroke, there is the influence of the shimmering, loosening of local color found in the work of Pierre Bonnard or Vuillard (modest masters, both), but the humility of traditional Hasidic life is reflected in the reduced style quotient in his work". Mira will explore the life and work of her father and what his legacy means to her and to the world. She will also reflect on the work of her mother.

The "Meet the Family" series accompanies the new Legacy gallery at POLIN Museum. The 26 individuals featured in the Legacy gallery, when considered together, form a collective portrait of Polish Jews and their achievements. The "Meet the Family" series goes beyond the 26 luminaries featured in the gallery to other individuals and broadens the discussion to consider how their lives illuminate the history of Polish Jews, and how the history of Polish Jews illuminates their lives. The series will offer a unique opportunity to meet their descendants, some of whom are devoting their own lives to preserving the legacy of their distinguished forebears.

The conversation with Barbara Kirshenblatt-Gimblett explores their lives, work, and legacy. How did those who achieved so much overcome limitations, pursue their goals, and take responsibility for themselves and others? May those we honor in these conversations inspire us today and in the future.

Barbara Kirshenblatt-Gimblett is Ronald S. Lauder Chief Curator of the Core Exhibition at Polin Museum of the History of Polish Jews and University Professor Emerita at New York University. Her books include "Destination Culture: Tourism, Museums, and Heritage; Image Before My Eyes: A Photographic History of Jewish Life in Poland, 1864–1939" (with Lucjan Dobroszycki); "They Called Me Mayer July: Painted Memories of Jewish Life in Poland Before the Holocaust" (with Mayer Kirshenblatt); "The Art of Being Jewish in Modern Times" (with Jonathan Karp); and "Anne Frank Unbound: Media, Imagination, Memory" (with Jeffrey Shandler), among others. She has received honorary doctorates from the Jewish Theological Seminary, University of Haifa, and Indiana University and was elected to the American Academy of Arts and Sciences and decorated with the Officer’s Cross of the Order of the Republic of Poland. She is the recipient of the 2020 Dan David Prize. She serves on Advisory Boards for the Council of American Jewish Museums, Jewish Museum Vienna, Jewish Museum Berlin, and the Jewish Museum and Tolerance Center in Moscow, and advises on museum and exhibition projects in Lithuania, Belarus, Albania, Israel, and the United States.

Mira Schor is a New York-based artist and writer noted for her advocacy of painting in a post-medium visual culture and for her contributions to feminist art history. Schor received her MFA in painting from CalArts in 1973 where she was a member of the CalArts Feminist Art Program and a participant in the historic feminist art installation Womanhouse. She is the recipient of prestigious awards in painting from the Guggenheim, Rockefeller, Marie Walsh Sharpe, and the Pollock-Krasner Foundations and of the College Art Association’s Frank Jewett Mather Award in Art Criticism. Her work has been included in exhibitions at The Jewish Museum; The Hammer Museum; MoMA P.S.1; and Kunsthaus Graz. Schor is the author of "A Decade of Negative Thinking: Essays on Art, Politics, and Daily Life" (2009), "Wet: On Painting, Feminism, and Art Culture" (1997) & the blog "A Year of Positive Thinking". She was co-editor of the journal "M/E/A/N/I/N/G". Schor is the recipient of the 2019 Women’s Caucus for Art Lifetime Achievement Award for her work as a feminist painter, art historian and critic. She teaches at Parsons Fine Arts & is an 2019/2020-21 artist in residence at the Sharpe-Walentas Studio Program, Brooklyn. Schor is represented by Lyles & King Gallery, NY.

Ilya Schor (1904 –1961) was a painter, jeweler, engraver, sculptor, and renowned artist of Judaica. Schor was born in Złoczów, Austrian Empire, later Poland, in 1904. He came from a Hasidic family. After early training in metalcrafts and engraving, Schor studied painting at the Warsaw Academy of Fine Arts. In 1937 Schor moved to Paris, where he was joined by his wife Resia Schor. The Schors immigrated to the United States in December 1941 from Marseilles, via Lisbon, after fleeing Paris in late May 1940. In New York City, Schor began artwork that would keep fresh his memories of life of the Jews of the shtetls of Eastern Europe, working in the many media at his disposal. He worked on major commissions for synagogues in the United States. Schor’s wood-engraving illustrations for "The Earth is The Lord’s" and "The Sabbath", writings by the philosopher and theologian Abraham Joshua Heschel have remained in print for seventy years. A retrospective of his work was held at the Jewish Museum in New York in 1965. His works are included in the collections of the Metropolitan Museum of Art, the Jewish Museum, The Jerusalem Great Synagogue Jacob and Belle Rosenbaum Mezuzah Collection, the North Carolina Museum of Art, and the Museum of Fine Arts, Boston.

Resia Schor (1910-2006) was a Polish-born artist who lived and worked in New York City from 1941 until her death in 2006. Schor was born in Lublin or nearby Łęczna to an observant  Jewish family. With the encouragement of her mother, in 1929 or 1930 Schor moved to Warsaw to study painting at the Warsaw Academy of Fine Arts, where she met her husband, Ilya Schor. The Schors lived in Paris before the War and immigrated to the United States in December 1941. Both Schors’ extended families perished in the Holocaust. The Schors had two daughters born in New York City: artist and writer Mira Schor and scholar of French literature and feminist theory, Naomi Schor. Resia Schor exhibited her paintings in New York City in the 1950s under the name Resia Ain. After Ilya Schor's death in 1961, Resia Schor worked exclusively in metal, creating one of a kind jewelry and Judaica, as well as multi-media sculptures, all in a bold modernist abstract style with a painterly feel for color and texture. An exhibition of her mezuzahs was held at the Yeshiva Museum in NY in 2000. Her sculptural works were exhibited in "Abstract Marriage: Sculpture by Ilya Schor and Resia Schor" at the Provincetown Art Association and Museum in 2013.

Susannah Heschel in conversation with Barbara Kirshenblatt-Gimblett about her father, a leading Jewish theologian and philosopher and civil rights activist.

Launch of the Legacy program

On Sunday January 17, POLIN Museum launches a series of programs dedicated to Polish Jews who made outstanding contributions to the arts, sciences, economics, politics, and other fields in the 19th and 20th centuries.
Exhibition

The Legacy gallery, an extension of the Core Exhibition, explores the lives and achievements of such outstanding individuals as Julian Tuwim, David Ben-Gurion, Arthur Rubinstein, Rosa Luxemburg, Raphael Lemkin, Ludwig Zamenhof, and Helena Rubenstein, among many others.