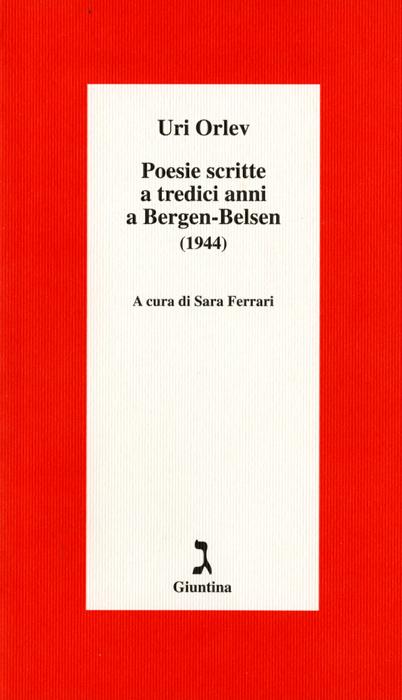 Book published in cooperation with the POLIN Museum of the History of Polish Jews.

I have written my first poems back when we were hiding on the “Aryan side” in Warsaw. These poems, however, have stayed there. As the area of the [concentration] camp was reduced, I went back to writing poetry, much like many other children did. I would write the first draft on a wooden plank which I broke free from the bed where I slept. It was only when I was fully happy with the end result that I would copy it into my notebook.

Confined at the Bergen-Belsen concentration camp, a young Polish Jew attempts to capture his fears of Nazi persecution on the pages of his notebook.

In 2005, the author – who has, in the meantime, adopted the name Uri Olev – translated his poetry into Hebrew. These poems are a true testimony – an authentic voice of a child of the Holocaust.

The collection of poems contains works translated from Hebrew into Italian as well as the reproduction of the artist’s original notebook, written in Polish.

Uri Olev was born as Jerzy Henryk (Jurek) Orłowski in 1931 in Warsaw. When his mother was murdered by the Germans, he and his brother and aunt were deported into the Bergen-Belsen camp. Today, he lives in Jerusalem. He has become a writer of international repute. He wrote numerous books for both young people and adults.

The text on the back cover of the book translated by Zuzanna Benesz.