David Wiśnia – a meeting with a witness to history 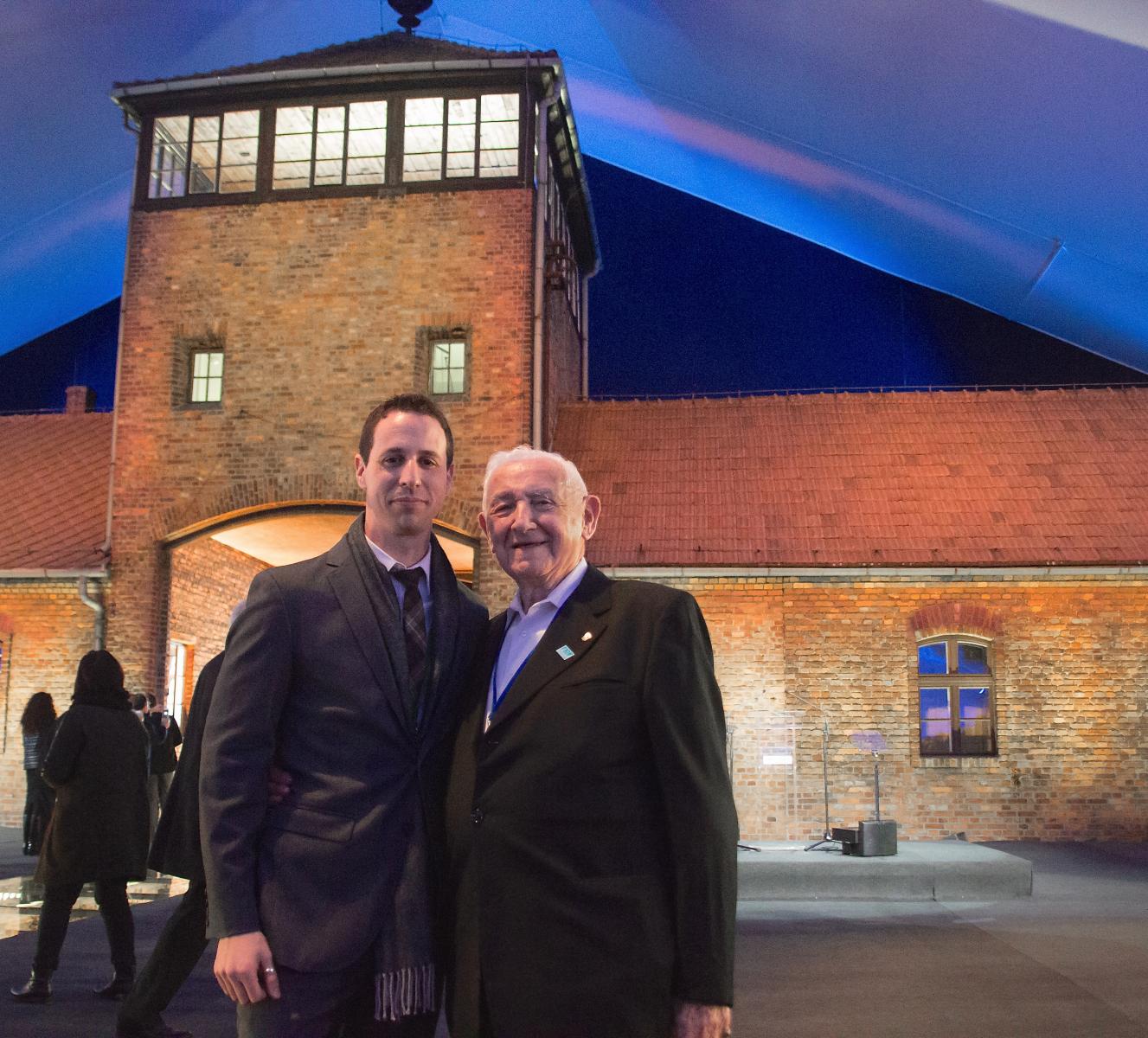 Cantor and Auschwitz survivor David Wisnia and his grandson, singer and songwriter Avi Wisnia, present a moving concert, with stories about the Holocaust and music that they will perform together.

With music as your guide across eras and styles, hear of the incredible journey from prisoner to survivor to WWII liberator, and experience the power that music has to connect generation to generation. The program includes an original Polish composition written by David while still a prisoner in the Nazi concentration camp, which Avi has translated into English.

David S. Wisnia has a remarkable voice, and he uses it to tell his remarkable story. A native of Warsaw, Poland, he is a graduate of the Yavneh-Tarbut Hebrew School System. He received most of his vocal training in Warsaw, as a student of the famous director/composer Maestro A.Z. Davidovich. Wisnia was also personally tutored by Cantors Gershon Sirota and Moshe Koussevitsky, singing in their respective choirs and performing on stage and on Polish radio.

Cantor Wisnia is a linguist, having mastered multiple languages: Polish, German, French, Slovak, English, and Hebrew (as well as Yiddish). He has performer internationally, leading services and giving concerts in Buenos Aires Libertad Synagogue (1975), Israel’s Yad Vashem (1983), and Warsaw’s Nozik Synagogue (1985 & 1986) where he officiated at the first formal “Bar Mitzvah ceremonial” to be held in Poland since World War II - this is the same synagogue where Wisnia sang as a choir boy over 70 years ago. He most recently appeared in concert with Maestro Leopold Kozlowski in “The Last Klezmer In Poland” in Krakow and Princeton, NJ, and he sang to commemorate the 70th Anniversary of the Liberation of Auschwitz at a 2015 event attended by both survivors and Heads of State, televised to an international audience of millions.

Cantor Wisnia is a survivor of the notorious Auschwitz Annihilation Camp where he was incarcerated for close to 3 years, saving his life by singing to entertain the Nazi SS and cell block leaders. While in the camp, he composed two songs that became popular with the inmates. One song is in Polish, “Oswiecim” (Auschwitz) and the other in Yiddish, “Dos Vaise Haizele” (The Little White House In The Woods), now on display at the Holocaust Museum in Washington DC. Wisnia was transferred to Dachau in December 1944, surviving the Death March, and managing to escape. He was soon found and rescued by the American 101 Airborne Division. Joining with the 506th Parachute Infantry, he engaged actively in combat during the closing days of the war with Germany in 1945, becoming both a survivor and a liberator.

David S. Wisnia continued singing in the United States. He served as Cantor of Temple Shalom in Levittown, PA for 28 years, and recently retired after 23 years as Cantor for Har Sinai Hebrew Congregation of Trenton, NJ. Wisnia is a member of the American Conference of Cantors within the Union of American Hebrew Congregations, and continues to be an active vocalist, educator, and congregational community leader.

A memoir of David Wisnia's powerful life story is now available, in conjunction with Comteq Publishing and Stockton University. For information about this book, "One Voice, Two Lives: From Auschwitz Prisoner to 101st Airborne Trooper", please visit www.onevoicetwolives.com

Avi Wisnia is an award-winning composer, singer, performer and educator, finding inspiration in Brazilian bossa nova, acoustic American folk, 1950’s west-coast jazz, and contemporary pop. Based in Philadelphia, Avi tours in support of his debut album, Something New, performing in prestigious venues around the world – from the Hammerstein Ballroom in New York City to The Kennedy Center in Washington DC to concerts in Warsaw, Poland and Rio de Janeiro, Brazil. His latest single “Sky Blue Sky” was recorded via satellite between Philadelphia and Brazil, winning recognition from the Philadelphia Songwriters Project and MidAtlantic Songwriters Competition. Avi Wisnia was most recently named Musician of the Year in his hometown of Bucks County, Pennsylvania. In addition to being a performing songwriter, Avi Wisnia has also given a TED talk about “The Nature and Nurture of Bossa Nova” and performed with The Moth storytellers.

Giving back and creating community through music has always remained a priority. In 2008, Avi created The No Brainer Benefit Concert with his family, which continues to raise funds and awareness for The National Brain Tumor Society. He organizes and hosts events like the annual Make Music New York Festival, The Bent Compass Party (for LGBT artists) and The House of Tribes Fundraiser (for Habitat for Humanity). Avi works with students, from high-schools to pre-schools, encouraging a new enthusiasm for music through discussions, workshops and interactive performances. Avi is also the creator of and ensemble director for The New York Megaphonica. For more information, please visit www.aviwisnia.com